The Nissan Micra is well-known in the UK for being a granny mobile, its small cheap to run and cheap to insure. Granny’s love them for doing the weekly shop at Tesco’s. In Japan however the March (JDM Micra) are little pocket rockets, modified to within an inch of their lives.

Gary Russell decided to bring the madness of Japan’s Micra scene to the Uk but on the way completely lost his mind!

It all started with a £100, white, 1 Litre example with a week left on its MOT. Working in a garage brings its benefits, having all the tools to hand is ideal along with the ramps to do the work but Gary had a vision for the little Micra. 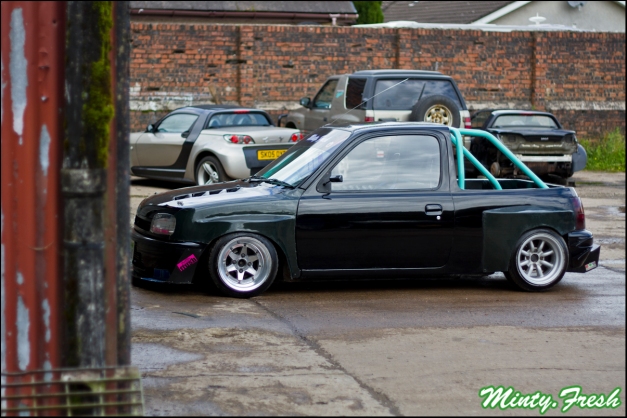 He wanted a car which he could build into a track car and also show off at the local cruises, a plan was hatched ……….

He took the Micra into the garage and chopped off the roof from the b pillar back and down onto the rear quarters, the result is pretty much what you see here albeit a very tidied up version. Although it sounds pretty mad Gary did have a proper plan in mind when chopping the roof, he strengthened up the rear for it to be able to take the extra force without the roof. He also slammed the car on the OEM wheels and took off to Edinburgh cruise.

After seeing the amount of attention the car got at the cruise he knew he was onto a winner. He painted the car black and fitted some old skool Honda civic rims in purple, he also installed the 21 point rollcage this added the much-needed extra strength for the rear of the car aswell as providing some added safety for the driver and copilot.

Gary headed to JAE in sept 2010 and teamed up with a website he had been visiting on and off (www.jdmtas.com) this is where he met Mint (yes M.F Mint) and myself amongst many others. Together we managed to scooped the converted “Stand Of the Show” trophy but once again the Micra got ALOT of attention, Gary knew even more time should be invested in the Pickup. 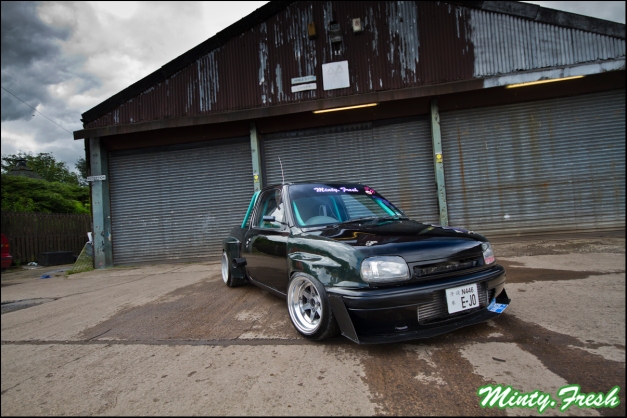 The summer passed into winter where Gary took the pickup on track to do battle with some bigger Jap cars, most notably an Impreza at Knockhill, where Gary came off better with only a 1.3 engine! 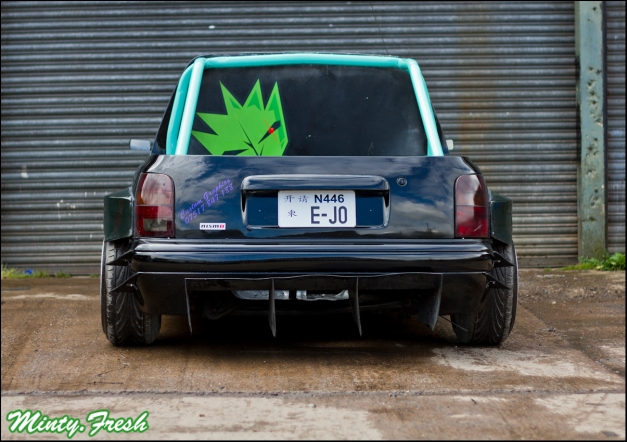 But he knew to create a truely one-off Micra Pick up something would have to be done which definitely hadn’t been done before. Now as said before Gary works in a garage and comes across all types of cars, one day a Silvia S12 passed by his door and was offered for sale. He knew the CA18 ET would be an awesome engine for the Pickup so the transplant was on!! 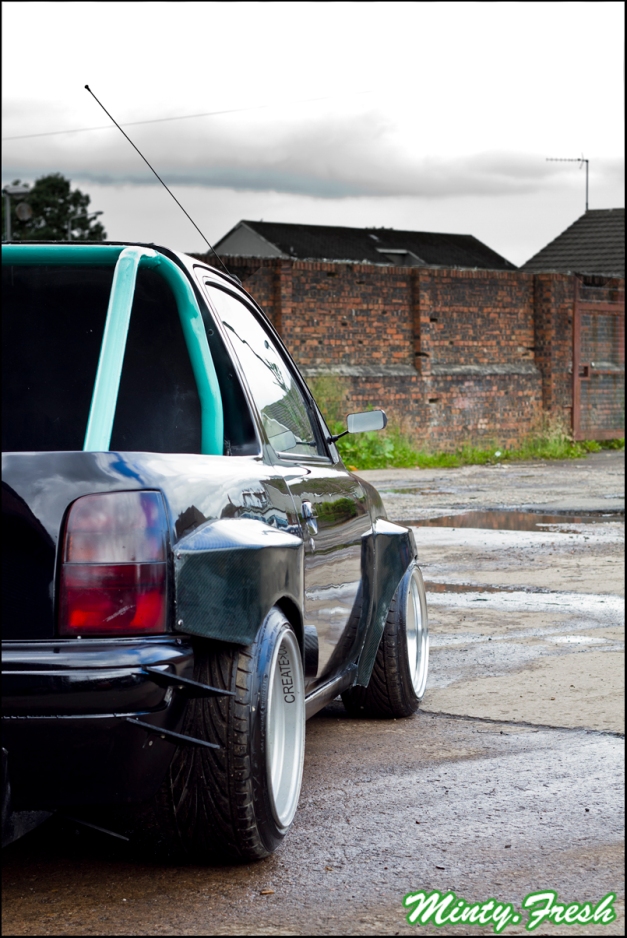 The CA wouldn’t be just totally straight forward but he wasn’t prepared for what lay ahead, with the engine out of the S12 he had to cut ALL of the engine mounts off and start from the beginning. The mounts had to then be measured up and fabricated to make sure it fitted then sent off to a machine shop to be properly made. Next the drive shaft’s needed to be modified again another custom one-off job along with the gear selector. He kept the FWD for now as it was proving a real problem to convert the pickup to RWD however never say never! 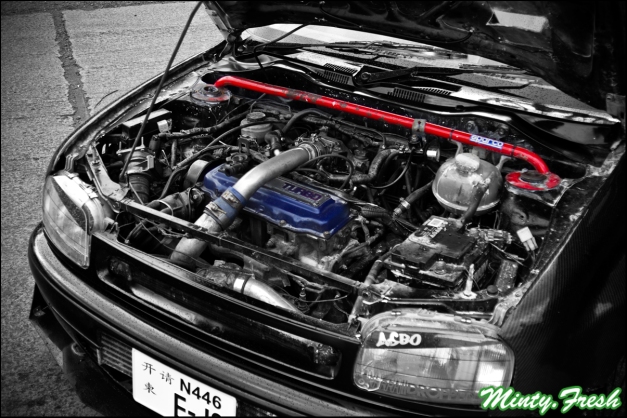 The CA got some upgrades too, a T28 turbo was fitted along with a full 3″ exhaust to help the engine breath. The exhaust tip was modified to exit just behind the driver’s door! A FMIC from a Renault truck was added into the mix to provide the cooler inlet temps.Fuelling is taken care of by twin walbro pumps fed from an alloy race tank and controlled by the S12 ECU along with an APEXi SAFC. 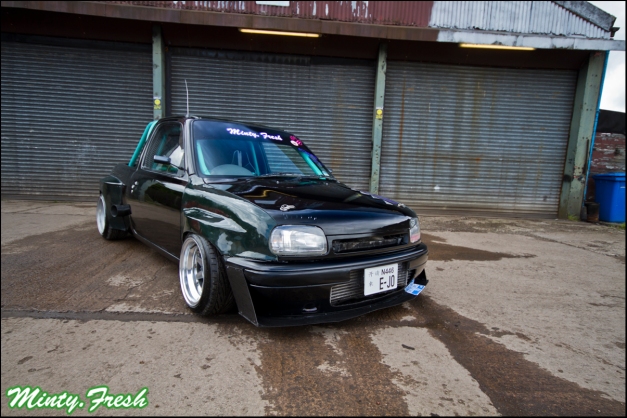 The car was pretty wild already but next was the plan to go the full on crazy you see here today! remember the meeting of Gary and Mint? well Mint as you know has been rocking out the carbonMAGIC carbon fibre with Mr d and Gary thought he would get the pair to knock up some one-off parts to go with his one-off pickup.

The roof was first to get the carbonMAGIC treatment, Gary removed the skin so Mint and D could get the right kinda shape sorted with the carbon. Now we at Minty.Fresh love green and the carbon is now different

Mint sold Gary his wheels from his Miata ……… and they wouldn’t fit so Gary made them with the help of carbonMAGIC once again, custom front arches were made to get the 8″ wide Longchamps fitted nicely. The rear quarters now housed 8.5″ wide Watanabes, Gary had to remove a load of OEM arch to get the perfect (non scrapping, it is a race car after all) fitment, Mint and D hooked him up with custom MAGIC rear quarters. It gives the Micra its super wide stance, just perfect for some track attack!

To go with the newly wide and faster Pickup Gary had to do a few upgrades, the brakes were upgraded to Almera GTi discs and calipers along with Carbontech pads …. the pickup needs to stop!

The interior got lightweight fibre glass seat with no padding! haha An Raid tach gives Gary the much-needed info on the revs as the standard clocks cant cope anymore.

And this is where we end up today, the car just receiving a pre show paint and a few added canards, the pickup is now ready for what it was built for full on track action. With 260bhp on tap and around 650kgs in weight, this little Micra isn’t quite what Nissan had in mind. Next stop is Knockhill to put the micra to test against the bigger cars of the Japanese scene

They might get past but one thing is for sure they wont forget the crazy ass Micra Pickup welded to their rear bumper!

As always check here for ALL the pics from the shoot